See Products by this artist 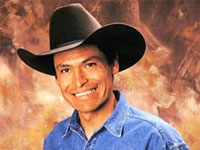 Calvin Begay is an award winning artist, jeweler, designer and master craftsman. He was born in Gallup, New Mexico in 1965 and raised in Tohatchi, northwestern New Mexico.

Calvin designed his first piece of jewelry at age 10, learning from his mother an uncle. In more than 20 years as a jewelry designer and craftsman, he has become a master in every aspect of the design and manufacturing process. He has won numerous awards at the Gallup Inter Tribal Ceremonial, including Best of Show in 1989. His jewelry has been featured in Arizona Highways and Southwest Art Magazines.

This gifted artist continually innovates and updates his designs, working in both gold and silver, and adding new motifs and stones to his repertoire.

In his leisure time, Calvin participates in rodeos and rides in the backcountry in his all terrain vehicles. When he creates jewelry, that wild free spirit finds expression in precious metals and stone.

He has a unique ability to translate traditional Navajo inlay techniques into jewelry that reflects his Native American heritage, yet have elegant and contemporary flair. Calvin’s work is prized by clients and collectors, not only in the Southwest, but throughout the United Stated and the world. In the artistry of Calvin Begay, the stunning beauty of the untamed West is reflected in the combination of color and design that create unforgettable pieces of wearable art.

Any cookies that may not be particularly necessary for the website to function and is used specifically to collect user personal data via analytics, ads, other embedded contents are termed as non-necessary cookies. It is mandatory to procure user consent prior to running these cookies on your website.